Getting a grip on essential tremor for a new beginning 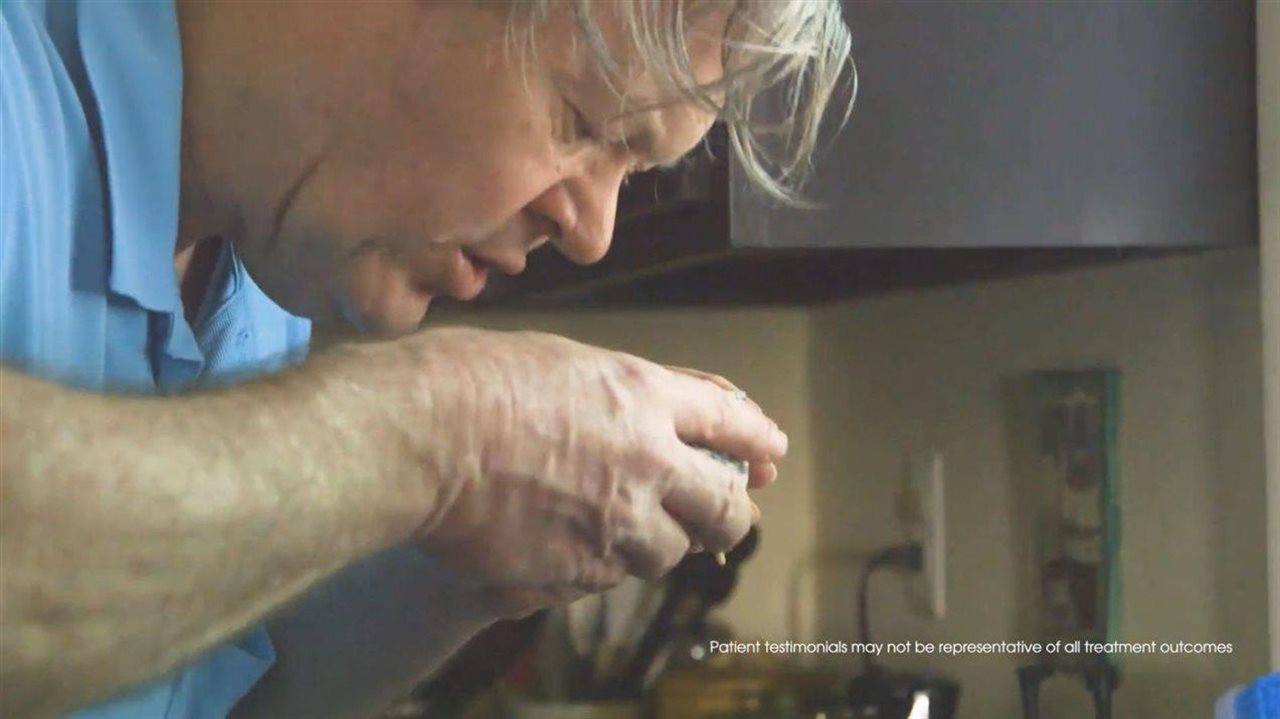 Imagine for a moment not being able to do this morning routine because your hand is shaking, and you can't make it stop.

These everyday tasks that we take for granted are very difficult for an estimated 10 million Americans living with essential tremor (ET). ET is the most common movement disorder, causing involuntary shaking in different parts of the body, but most often affecting the hands. The physical and emotional effects of ET take their toll not only on patients but on their family and friends as well. Jodi Meyer has been affected by it for 18 years. As the mother of three children, her essential tremor made it very difficult for her to care for her family. Preparing meals, putting on her daughter's makeup for her cheer competitions or pouring a glass of milk was almost impossible to do with her hand shaking uncontrollably. "I would love to cuddle with my children … and not think … are they uncomfortable because of the shaking?"

Depending on others for help is common with ET, but when you have people who rely on you, the dynamic changes. Karen Dopher has always been the caregiver for her family. She took care of her husband during his battle with cancer and came when her son called and said, "I need you," during his double lung transplant. Her role as caregiver for her family was challenging as her ET became more severe. There were days when she was not able to cook or draw with her granddaughter.

Precise work-related tasks are another problem for people with ET. Electronics technician Gregg Ley struggled with the day-to-day duties of his profession which required excellent motor skills to work with nuts, bolts and other tools. "I couldn't put a Phillips screwdriver on a screw." Ley lived with ET for over 20 years, with the condition worsening over time. When the medications prescribed by his neurologist stopped working, Ley’s wife, Cathy, began researching treatment options for his tremor online.

While essential tremor is not fatal, it can take away a person’s independence, self-esteem and the freedom to live an active lifestyle. As awareness for ET grows, it is crucial that people speak with their general practitioner about their tremor symptoms and if needed, get referred to a movement disorder specialist for diagnosis.

One key distinguishing factor is that tremors from ET occur during an action, while tremor from Parkinson's disease is usually when the hands are at rest. While the only symptom with ET is tremor, Parkinson’s disease is a degenerative condition that presents with other symptoms besides tremor.

ET can affect people at any age, but it is most common among those 50 years of age and older. There are medications prescribed to treat essential tremor, and often, after one medication fails, a second will be tried and then possibly a combination of medications. They are only effective for 35-50% of patients according to an article published in Neurology November 2011.

Advancements in ultrasound and MR imaging technology have led to the availability of an incisionless treatment for patients with essential tremor that has not responded to medication. During the focused ultrasound treatment, sound waves pass safely through the skull to heat a precise target deep in the brain that is responsible for the tremor. The treatment is monitored by MRI (magnetic resonance imaging). For many patients, the results show immediate improvement in their hand tremor with minimal complications. This treatment is FDA-approved to treat one hand and is covered under Medicare, in certain states, and through many Blue Cross Blue Shield plans.

Meyer struggled to tie her child's shoe, Dopher longed to remain independent and Ley wanted to continue working in his profession. They all learned about focused ultrasound through social media. Focused ultrasound was able to help pave a new path for their lives by treating their ET with no incisions, no anesthesia and no hospitalization. Today, they are not missing out on the things they love doing — they have a new beginning.

Learn about the symptoms of essential tremor

Does ET run in your family? If you have a parent with the genetic mutation for essential tremor, then you have a 50% chance of developing the condition yourself according to the Mayo Clinic.

Does your tremor worsen in certain situations? Patients report that stress, fatigue and caffeine can cause their tremor to be more pronounced.

A neurologist who specializes in movement disorders should be consulted for diagnosis and to discuss treatment options. For more information on essential tremor, visit GetaGriponET.com.