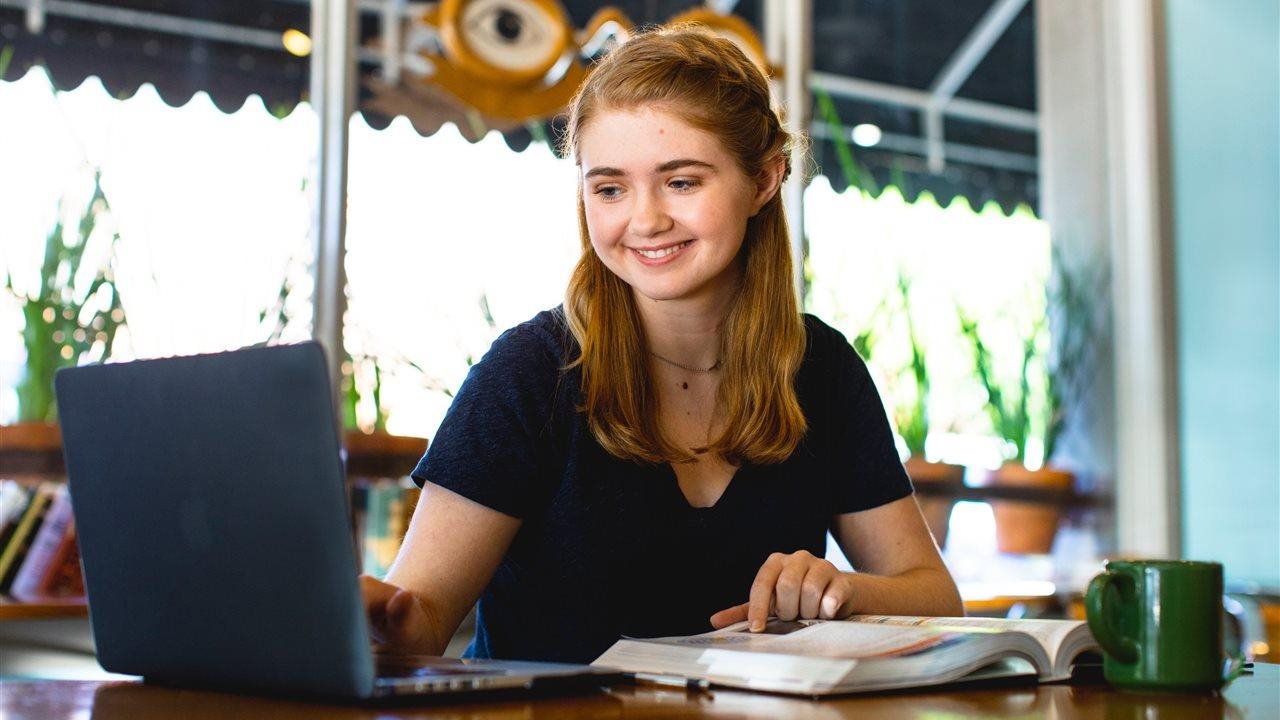 November is recognized as National Epilepsy Awareness Month in the US. Epilepsy is a brain disorder involving recurrent, unprovoked seizures. The CDC reports that about 3.4 million Americans live with epilepsy today [1].

For anyone living with epilepsy, coping with the challenges of the disease involves more than just physical health. Many living with the neurological condition may experience emotional challenges, like worrying about when their next seizure will occur or feeling overwhelmed when it comes to choosing the right treatment options.

Isla Ritchie, a university student from Texas, began having seizures at age 11. Isla experienced multiple seizures weekly, which affected her entire body and left her feeling sore and fatigued for days. At first, doctors prescribed her a variety of anti-seizure medications, but nothing controlled her seizures until she was introduced to VNS Therapy™ when she was 12.

Isla has drug-resistant epilepsy (DRE) – a diagnosis given to patients after two anti-seizure medications fail to control seizures when used for an adequate period of time as determined by a patient’s physician. According to the Epilepsy Foundation, about one-third of adults with epilepsy and 20-25 percent of kids with epilepsy have DRE [2].

VNS Therapy™ has been FDA approved since 1997 [3] and is indicated for use as an adjunctive therapy in reducing the frequency of seizures in patients four and older with drug-resistant epilepsy who have partial onset seizures. It is a unique, implantable medical device that works by delivering mild pulses of stimulation through the left vagus nerve to areas of the brain known to be associated with seizures. It’s placed under the skin of the chest and connects to the vagus nerve in a short, outpatient procedure that takes one to two hours.

Through a combination of one medication and a VNS Therapy™ device, Ritchie has been able to keep her seizures under control. Now 19, she has more seizure-free moments and recently started studying entrepreneurship and international business at a university.

“Advocacy allows those touched by epilepsy to receive the best possible care and achieve the highest quality of life and independence,” said Angus Wilfong, MD, Pediatric Neurologist practicing in Phoenix, AZ. “Understanding all the latest epilepsy treatment options is important and surveys such as this highlight how these treatments affect overall well-being, beyond simply reducing seizures. Treatment options like VNS Therapy™ that may reduce the frequency and severity of seizures can make huge quality of life improvements for those living with drug-resistant epilepsy, and their families.”

More than 125,000 patients, including over 35,000 children, have been treated with VNS Therapy™ worldwide. VNS Therapy™ can lead to fewer seizures, shorter seizures and better recovery after seizures.

Common side effects include hoarseness or change in voice tone, shortness of breath, sore throat, and coughing. These side effects generally only occur during stimulation and usually decrease over time. Implant site infection is the most common side effect of the procedure and can often be resolved with medication.

While individual results may vary, VNS Therapy™ can help patients like Isla manage seizures and thrive.

“VNS Therapy™ has given me the seizure control I need. I can now confidently talk to friends, be social, stay alert in class, and network,” said Ritchie. “It’s a part of me that I’m grateful I have. I can study, achieve my goals, and chase my dreams again.”

When a patient has epilepsy, they should be seen by an epilepsy specialist who can help them get control of their seizures.

Find out more about VNS Therapy™ at www.VNSTherapy.com.

Isla Ritchie is a Patient Ambassador for LivaNova's VNS Therapy™ system, for which she receives modest compensation.

About VNS Therapy for Epilepsy

The VNS Therapy System is indicated for use as an adjunctive therapy in reducing the frequency of seizures in patients 4 years of age and older with partial onset seizures that are refractory to antiepileptic medications.

Vagotomy — The VNS Therapy System should not be used (is contraindicated) in people who have had the left vagus nerve cut to treat another disorder (a left vagotomy).

Diathermy — Inform anyone treating you that you CANNOT have any short-wave diathermy, microwave diathermy, or therapeutic ultrasound diathermy (hereafter referred to as “diathermy”) anywhere on your body because you have an implanted VNS Therapy System (sometimes referred to as a “Vagus Nerve Stimulator” or “Vagus Nerve Stimulation”). Injury or damage can occur during diathermy treatment whether your VNS Therapy System is turned “ON” or “OFF.” Diagnostic ultrasound is not included in this contraindication.

Unapproved uses — The safety and efficacy of the VNS Therapy System have not been established for uses outside its approved indications for use. The safety and efficacy of VNS Therapy have not been shown for people with these conditions: history of previous therapeutic brain surgery or brain injury, dysautonomias, lung diseases or disorders, including shortness of breath and asthma, ulcers (gastric, duodenal, or other), fainting (vasovagal syncope); irregular heartbeats (heart arrhythmias) or other heart abnormalities; other concurrent forms of brain stimulation; pre-existing hoarseness; under 4 years of age; progressive neurological diseases other than epilepsy.

Device removal — Removal of the VNS Therapy System requires an additional surgical procedure. When a device is removed, the surgeon may leave part of the lead behind. This may pose certain risks.

Device trauma — Blunt trauma to the neck and/or any area of the body beneath which the lead is implanted could possibly cause damage to the lead.

Not a cure — The VNS Therapy System does not stop all seizures. Continue to avoid activities that can be hazardous to you and others, such as driving and swimming alone.

Before having any MRI performed — Call your doctor, so your VNS Therapy System can be discussed with the MRI personnel. In many cases, an MRI can be performed safely under certain conditions. However, for a few other cases, surgery may be required to remove the VNS Therapy System prior to an MRI. Before undergoing an MRI scan with your VNS Therapy System, the VNS system diagnostic information will be collected and the current turned off. The current will be turned on again after the scan is completed. Your doctor has access to detailed MRI-related information in the physician’s manual.

Patient Magnet is MR Unsafe — Do not carry the patient magnet into the MR scanner room. The magnet could become a dangerous flying object if attracted by the strong magnetic field of the MRI scanner.

Pain or other sensation during MRI scan — If, during an MRI scan, you have any pain, discomfort, heating, or other unusual sensations, notify the MRI operator, so the MR procedure can be stopped.

Cardiac Arrhythmia (Model 106 or 1000 only) — If you have a cardiac arrhythmia, the Automatic Stimulation feature of the Model 106 is not suitable for you. This includes heart conditions or treatments that do not allow necessary changes in your heart rate, such as atrial fibrillation, pacemaker dependency, implantable defibrillator, or cardiac medications such as beta blockers.

Laryngeal irritation may result from stimulation— Patients who smoke may have an increased risk of laryngeal (commonly called the “voice box”) irritation.

Use during exercise — Exercise or physical activity may trigger Automatic Stimulation if the feature is ON due to heart rate changes detected by the device.

Heart Rate Changes Not Associated with Seizures — Situations, including but not limited to exercise or physical activity, that cause rapid increases in heart rate may trigger Automatic Stimulation if the feature is ON. If this is a concern, talk to your doctor about ways to stop stimulation during these situations. This could include using your magnet or having your doctor turn the AutoStim feature OFF.

Battery Drain — If your doctor has turned on the AutoStim feature, there will be a greater impact on battery life than if the feature is turned off, which may require more frequent generator replacements.

Time-based Features (Models 1000 only) — Optional time-based features (e.g., Day-Night Programming, Scheduled Programming) do not automatically adjust for Day Light Savings Time or time zone changes. If you are using one of these features, you will need to go back to your doctor for reprogramming of the generator for any time changes.

Being close to certain types of equipment can affect the generator. Move away from or avoid equipment such as transmitting antennas.

Small appliances — Properly operating microwave ovens and other small electrical appliances, such as toasters, hair dryers, and electric shavers, should not affect the generator.

Cellular phones — Cellular phones can affect some implanted cardiac defibrillators and pacemakers, but tests to date show that they do not affect the generator.

Transmitting devices — Properly operating electrical ignition systems and power transmission lines should not affect the generator. Sources with high energy levels, such as transmitting antennas, may interfere with the device. Move at least 1.8 meters (6 feet) away from any equipment that interferes with your device.

Electronic Article Surveillance (EAS) System tag deactivators — The tag deactivators found in many retail stores can interfere with VNS Therapy when it is used near the generator. It can cause accidental activations or stop pulses. Stay at least 60 centimeters (2 feet) away from tag deactivators to avoid potential interference.

Devices with strong electromagnetic fields — Electrical or electromechanical devices with a strong static or pulsing magnetic field can cause the generator to start suddenly. Such devices may include strong magnets, tablet computers and their covers, hair clippers, vibrators, antitheft tag deactivators, and loudspeakers. Keep this type of equipment at least 20 centimeters (8 inches) away from your chest. If your generator stops while you are in a strong electromagnetic field, move away from the source so the device may return to regular operation.

Make sure that medical personnel know you have a device implanted in your chest.

Always call your doctor before you have any medical tests that may affect, or be affected by, the VNS Therapy System as described in this section. Precautions may be needed.

Mammography — Because the generator is in your chest, you may need to be specially positioned for a mammogram. Otherwise, the device may be seen as a shadow on the mammogram. It could make a lesion or lump in that area hard or even impossible to detect. Make sure that your doctor and the mammography technician are aware of the implanted device.

Radiation treatment — Treatment with radiation, cobalt machines, and linear accelerators may damage the generator. No testing has been done to date. The effect of radiation on the device is not known. Talk with your doctor if you plan to have radiation treatment.

While the generator is stimulating or being set or tested, it may briefly interfere with nearby equipment. If this happens, move at least 1.8 meters (6 feet) away from such equipment.

Radios and hearing aids — The generator can interfere with devices that operate in the 30 kHz to 100 kHz range. Hearing aids and transistor radios operate in this range. In theory, the generator could affect them, but no effects have yet been reported. No detailed testing has been done, so the effects are unknown.

Other Implanted devices — The generator may affect other implanted medical devices, such as cardiac pacemakers and implantable defibrillators. Possible effects include sensing problems. These could lead to inappropriate responses from the generator.

After your operation, your doctor will give you two magnets and accessories. The magnets contain a high-power magnet that is surrounded by a plastic casing in the shape of a watch. With normal use, they should remain powerful for approximately 3 years

If you are not sure how to use the magnet or have questions, ask your doctor to show you how.